Home » The Famous Blog » Is There a Movement to Take ‘Social’ out of Social Sites? For Some There Is! 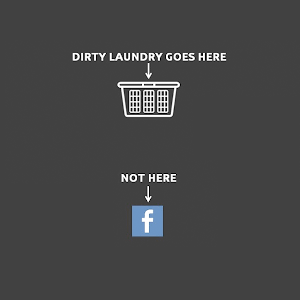 Recently a photo began circulating Facebook that would have you think you are living in a scene from The Stepford Wives. The gist of this little infographic is that you shouldn’t put your dirty laundry on Facebook but rather in the laundry basket in the picture.

The point is, you can say anything you want as long as it is all happy and gushy over someone’s news, but the moment you start talking about something that angers you, something that might verge on controversial, you had better keep it under wraps.

Excuse me, but we would have few friends in real life if we couldn’t express our innermost feelings, including the good, the bad and the ugly.

What Is Social Media Anyway?

So then, if Facebook isn’t a social site, what exactly is it? As a side disclaimer here, the little photo was not released by Facebook, not endorsed by Facebook and in no way, shape or form reflects the ideology of this ‘social site.’ It is the mindset of the typical user that is in question here and how they came to the understanding that you must say something nice or nothing at all.

Let’s jump back for a moment to the concept behind social media. These are places where friends and family can stay in touch and share memories from the past or as they are being made. Not all memories are good, so why should you be limited to sharing only the good? With this type of mentality circulating the site, you would be limited to sharing only those thoughts that others agree with.

It could be argued then that social sites like Facebook are just the places you would air your dirty laundry. Again, let’s look at the premise that this is a social site for friends and family to gather. Does your family limit you to only sharing the high points of your day? Have you never come home angered at some event or a way in which you feel you were mistreated? Does your family tell you to shut up and say nothing unless you have a happy story to tell? Then, why should social media be any different?

But, what about those who say that they have ‘clients’ that are their ‘friends’ on Facebook? Again, this is not a treatise on Facebook but rather a general introspection on how some people view the purpose of this social site. Since it is the most visited and used social media in the world, it is the obvious choice for this particular discussion. If someone is worried about what a ‘client’ may or may not think of them based on posts on their page, it is no longer a social site but a business site and being used for all the wrong reasons!

Those involved in SEO and marketing know the value of paid advertising on social sites so let’s keep that in mind as well. Social sites are quickly becoming some of the world’s leading marketplaces and are being seen as such. However, this should in no way influence how people are allowed to express their feelings on their own page. Ad targeting will go on as usual so these sites can still bring in money for the big guns behind the scenes.

Are We Being Targeted by the ‘Thought Police’?

Can your thoughts really be controlled or the way in which you express yourself be limited based on what someone may or may not want to hear? If this sort of propaganda is allowed to continue, who knows, it might one day filter into a social site’s policy. But then again, to limit them the power to express their objections to the objectionable would be a control mechanism as well.

So where to go with this? Perhaps it is better to see sites like Facebook for what they are, a way in which people separated by time and distance can share as they choose. The operative word here is ‘choose’ and if they choose to tell stories you don’t want to hear, don’t listen! It’s really just that simple. However, once you ‘comment’ on their story, you are just as guilty as the offending party because you now are on the objection side of the argument.

Your Choice – Put Up or Shut Up

Do you now see where this is going? If you only want input based on your own way of thinking, start your own message board. For less than $20 USD you can get a domain name and for a small fee you can get hosting for your message board that is also included in the umbrella definition of a social site. According to the definition on whatis, social media is an online collection of communications channels that have been dedicated to input from the community. However, they never say that the input is to be regulated by one or more parties who ‘choose’ to disagree or dislike posts.

Facebook is a place where you can share the good, the bad and the ugly so let’s get it straight here. You have two choices. You can either ‘unfriend’ someone if you don’t like their vantage points on something oryou can join the discussion and agree to disagree.

Unfortunately, once you tell them to leave their dirty laundry at home you are limiting their right to freely share their own personal feelings. This is not Communist Russia in the 1960’s. We live in the 21st Century where we are free to express ourselves.

If you don’t like what others are saying, don’t listen! It is not your place to tell them what they can or can’t say on a public site unless it is violent or in some way discriminatory. But to ask others not to talk about feelings they have because they are relegated to the ‘dirty laundry’ department is ludicrous.

The bottom line? It’s social media folks and social doesn’t mean you need to love everything, it means that you are a social creature and are willing to communicate your likes and dislikes. Small businesses use the sites with a PR approach and people are interested in different things that they used to.

Everyone has the right to their feelings and if they don’t agree with yours, so what? You can put up or shut up, but you can’t change the rules simply because you don’t like them. If that’s your game, start your own site. 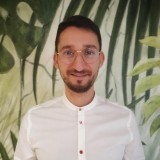 I graduated University of National and World Economy with major marketing. Currently I run several blogs and I am passionate about blogging