Home » The Famous Blog » The True Story Of GritFX T-Shirts 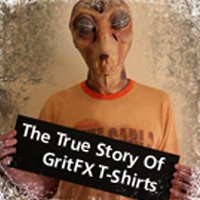 It was 1968 when a spacecraft of extraterrestrial origin landed in the Australian outback, about two hundred kilometres west of Uluru. The craft bore two alien occupants who were kidnapped and experimented upon by a shadowy branch of the Australian Defence Force. In 1974, the alien visitors escaped the top-secret facility known as Area 61 and went into hiding in Sydney. Three decades later, they resurfaced and began the online t-shirt phenomenon known as GritFX. Now, only one man can stop them from…

Oh, wait…sorry. That’s the Hollywood version. The true story of the birth of GritFX is far less stupid. But before we get into that, let me begin by saying what an honour it is to be able to tell our story – thank you, Famous Bloggers!

So, if UFOs and secret military experiments are possible, then so is the thought of turning our combined passions into an online venture. At least that is what Dave and myself thought three years ago. It was a dreary Monday (or maybe it was a Tuesday?) when I kicked my chair back from the computer and thumbed my nose at the corporate graphic design I’d been working on. I turned to Dave and began to complain and he sighed and left the room.

An hour later, he returned and I continued my tirade. I needed some kind of outlet for neglected creativity, and somehow, in this hour of need, I stumbled upon Zazzle. It seemed so obvious. Combine passions into an online store. I made my way down to the local store and purchased some gaffer tape, rope, nails and a hammer. I hurried back home and following an hour of torture, Dave agreed to help with the conception of GritFX.

~ Perspiring In The Dark ~

And so it simply began from there – a single page website, a blog on Blogspot, and a totally naïve idea of what it would take to make it in the online t-shirt market. Anyone can start an online t-shirt store, but what’s going to set you apart from other shopkeepers? In such a flooded market, why should anyone give two craps about your brand? These questions kept me awake and sweating during the night like the folks in Trainspotting. It seemed to me that the best way to approach our own store was simply to concentrate on our passions; which actually wasn’t that simple. We both loved movies, music, weird stuff – but a focus on any one theme was near impossible a decision to make. Keep it simple, huh? Yeah right. Let’s do it all.

But of course, for any venture to succeed, you need focus. Build a brand and be original (which is a difficult task in itself these days), whilst developing a clear business philosophy – without which marketing is next to impossible.

So instead of the theme of GritFX being just about movies, or just about music, or just about weird and funny t-shirts, the theme became everything we embrace. We had friends who were passionate about writing, so we invited them to write for our blog (which eventually became the Magazine) on the subjects expressed in our t-shirt designs.

The idea to have an accompanying Magazine for our t-shirt store was not born solely to use as a marketing angle. It was an avenue of creativity for our friends (and ourselves), just as the designing of t-shirts was an avenue for Dave and myself. We wanted to give a voice to our friends and people we respected, and an online bullhorn for us all. None of us may be experts on anything, but we’re certainly ‘passionate fanatics’.

With Dave writing film reviews and other weird articles under the pen names Wadrick Jones and Max Drake (just to keep things mysterious…yawn), we asked our buddy Decoy Spoon to write about music. If guitar strings were edible, Decoy would have them in a bowl with milk and sugar every morning. Soon, as movies became a larger part of our t-shirt range, we asked freelance writer Adam Fay to join the team, lending an alternate perspective to the standard cinema review.

I began to see the obvious advantage of promoting the Magazine due to the content being discussed, and then, eventually, utilising the Magazine for posts relating to the GritFX T-Shirts store and for announcing competitions. With the invaluable help of web programmer Wayne John, we made the leap from Blogspot to WordPress and launched a funky new template last year. Recently, Australian graphic artist Matt Dunn joined the Magazine to lend his voice to comics and art and monkeys (yeah, that’s right, monkeys), and we are proud to have him on the team.

After a year or so of experimenting and re-designing and cracking my head (and Dave’s) against the wall, we finally evolved the GritFX online store into something we felt was complete and in cement. It was a slow process, but in hindsight, worth all the effort to work the brand into something relatively unique, as well as one that also satisfied our own pedantic natures.

Being of the so-called Generation X, it is not difficult to engage with technology. Our generation have lived through the evolution of modern tech; things like video games and iPods (etc) are not foreign to us as they may be to our parents’ generation. So to anyone out there who may be reluctant to embrace technology, specifically social media, do not be afraid. Take the leap, for to succeed in the online marketplace, the engagement of those potential fans/customers utilising social media is of the utmost importance.

Remember, there is still time to purchase a GritFX t-shirt and visit our Magazine. The mothership is not due to swing by Earth raining fiery death on humanity until 2012, so… 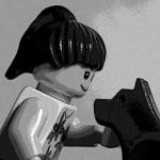