For someone who wants to compete with hugely popular and well established apps such as Skype, Facebook’s messenger and iMessages, Google didn’t do a very good job with Hangouts.

I may have praised the app when it released initially but after using it for a week longer I’ve been forced to change my stance. It may look pretty and all, but it seriously lacks some oomph.

Google had initially called their messaging project Babel. The word Babel is used for the city of Babylon in the Hebrew bible. The Tower of Babel might ring a bell or two among some of you. What’s the significance? In the bible, Babylon was where humanity had converged after the great flood during Noah’s time. There they thrived as one people with one unifying language. God striking down the tower and scattering humanity is another story. Have they lived up to it? Barely.

There was Google plus, there was Gmail, there was your phone, the desktop app and maybe even your tablet. The idea was that you wouldn’t have to get rid of the notifications from all your devices if you had already checked from one. And it actually does this decently. Aside from this, the app is riddled with little flaws that make using it utterly frustration.

The Cracks in the Tower

If I click on a name on the Facebook website, a chat-box for that person automatically pops up. Of course I’m just being redundant. Everyone knows that. But there is also something that everyone might take for granted – the fact that your cursor is immediately in the chat box; which means you can start typing away. Why do I mention this? Because if you’re using the Hangouts app on the desktop (which is a web app if I’m not mistaken), clicking on someone’s name doesn’t also move your cursor to the newly opened chat box.

Is this something trivial? Yes.

Does it take less than a second to click on the chat box? Also yes.

Should I be complaining about this? Damn right I should.

Such a simple feature – Every single self respecting messaging client should have it and does for the most part. Heck, even the old Google Talk app for the desktop had it. Furthermore it was probably a more superior app, too! One that stopped receiving updates at some primordial age. In its own minimalist way it had its necessary amount of features with little to no concerning issues: none of the aforementioned annoyance, voice calls, the emoticons (just the text turned bold and blue) were rather nice, going off the record, and sending files.

Speaking of which, that brings me to another disastrous neglect in the previously named Babel app. What is this bullshit about not being able to send files through Hangouts? MSN had it in its day. AIM had it, YIM has it, trillian has it, Skype has it, and even freaking Facebook has it, which kills the argument that it’s a web app and I shouldn’t be expecting it. Once again,not worth it. I can drag and drop files onto the not-so-old not-so-new updated compose mail that pops up near the chat boxes in the gmail website. So, very clearly, they have the ability – why then feed us breadcrumbs of features that Hangouts needs desperately in order to stand up against the others.

That being my biggest gripe, I also hate the fact that it’s near to impossible to tell who’s online, who’s busy, who’s away and who’s on his phone. In the Gmail chat, to which I reverted back to after only a few days of Hangouts, I can add a little labs technology and see who’s online from their android phone and who from their computers. I can see my online friends in green and my away/idle friends in orange. Hangouts on the other hand has no indication whatsoever of who is currently online and who’s not. I had previously said that this is merely blurring the line between texting and online instant messaging; while this is true, it could not have been more counter intuitive. The desktop version is supposed to have a green bar underneath your friend’s profile picture thumbnail – but I’ve not found it sufficiently accurate if even present.

Hangouts also changed an aspect that was well-liked by many. Its Jabber/XMPP support – the very protocol they had helped foster. Previously on the old versions, you could chat with anyone under those protocols, without them requiring any Google email IDs. But after the update, those contacts you had previously added will no longer even appear on your contact list. Searching for them lets you only send them mails – except you can’t because they worked through IDs and not emails! Bad move, Google.

What does it do good, though? It can’t be all bad, right?

Right. It’s pretty looking. I personally love the user friendly interface – it’s just the experience part that chips away at my sanity the same way water erodes a mountain.

There is a feature similar to the ‘seen’ thing on Facebook. Your contact’s display picture will be beneath whatever message they last saw. On the phone, I find sharing links and images easier, although I’ve also found that my friends often (or is it all the time? I can’t remember to be honest) cannot see the picture I share – this actually might be due to a discrepancy of old Talk/new Hangouts thing.

I enjoy the ability to create group conversations or Hangouts that are saved for me to quickly start up the same conversation for the future.

On the Android, I do care for the swiping right for the contacts list with the the present Hangouts on the left. It saves the need to move your thumb away from the app area (to tap the back button).

And there really isn’t much else to the app. The desktop version is seriously lacking and the Android one isn’t that far off. Google seriously needs to up its game and fast. SMS needs to be implemented, as well as file sharing and once again we know the ability exists as seen in Gmail Chat; Google voice already allows the receiving of text messages if I’m not mistaken – so, seriously, what’s the hold up, guys? 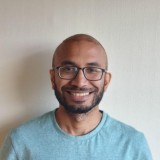 Shahriar Emil, Editor-in-chief of Techetron, spends an inordinate amount of time at keyboards and it is only reasonable that some of that time is spent to writing. When he is not creating new worlds and ranting about technology, he spends his time designing and playing video games. He fears that if he ever devoted his full attention on writing, he would become stupidly famous and won't have time for anything else.